Comic Book “Issues”: Making Waves on What Should Be a Calm Sea of Tolerance

Editor’s note: This article was written before DC’s announcement regarding Alan Scott. Thx.

All right, all right, don’t get your red knickers in a twist. Superman is NOT gay. And he probably won’t be for the foreseeable future. But let’s imagine for a bit that the biggest, most iconic comic book hero ever was in fact a card-carrying member of the Friends of Dorothy. How in the name of Rao would the real world take it?

Not very well, given recent reactions to reports that both Marvel and DC are embarking on a new wave of superhero same-sex shenanigans. In the past few weeks, there has been controversy over efforts from both companies to sexually “diversify” their stables of characters. Even the chatterboxes on The View got in on the act by discussing the marriage proposal of Marvel’s openly gay X-Man, Northstar (aka Jean-Paul Beaubier), to his longtime boyfriend, Jean-Paul already held the distinction of being the first superhero in comics to come out and admit to the world he was gay, so it’s only logical that he would be the first to make the leap into a same-sex union.

Around the same time, DC, in the throes of rebuilding its universe after the “New 52” reboot, began leaking information that one of their own prominent superheroes was going to be reintroduced as a homosexual. Immediately, speculation as to who the “new gay” could be began running as rampant as a first-place contender on RuPaul’s Drag Race. Every name from Wally West to the Atom to Plastic Man was suggested, but, as of yet, all DC will confirm is that the hero is a male and is someone who has yet to make their New 52 debut.

You would think announcements such as these wouldn’t be that big of a deal, yet there are an unfortunate number of people who feel otherwise. The so-called “One Million Moms” organization—a group of women who have taken it upon themselves to be the “goodness” police—have publicly and vocally expressed their displeasure with Marvel’s gay marriage storyline. It is their opinion that children should not be exposed to these “situations,” decrying them as “immoral” and “reprehensible.” (Never mind the fact that, these days, the majority of comic book readers are adults.) This is the same group who a few months ago who made a failed attempt to bully JC Penney into abandoning its new ad campaign featuring Ellen DeGeneres.

Radical groups such as the One Million Moms are to be expected whenever controversial issues arise. But it seems as if the LGBTQ community can never catch a break from anybody—not even the little guy. All one has to do is scan the Comments section of any major Internet article that mentions homosexuality. They range from pitiful to hateful to downright nasty and ignorant. And it’s not just one or two comments—it’s several (although just one is bad enough). To me, this speaks volumes as to just how intolerant American society is, even in this day and age. And it makes me fearful that this level of intolerance and bigotry is never going to diminish.

What I don’t understand is why this has to be an issue at all. I am a gay man myself, so I am fully aware that sexuality is a natural biological function. I’m also aware of how difficult it can be for heterosexuals to realize that being gay or straight is not a choice. I suppose it’s “easier” for them because, if they condone it, they’re afraid they themselves will be looked down upon and ridiculed. That’s certainly no justification, but from an objective point of view it’s a theory that does make at least a little bit of sense.

However, the most insurmountable hurdle faced by homosexuals is religion. Far too many people take literally the words of whatever sacred text to which they ascribe. Many of these books are interpreted as condemning the practice of homosexuality; therefore, since these texts are said to be the word of a higher power, it is ungodly and immoral. But—and has been pointed out numerous times by numerous individuals—if we were to apply it that line of thinking to other practices condemned by, for example, the Christian bible, practically everyone on the planet is guilty of committing a no-no. So why does homosexuality still get such a bad rap upon?

A current storyline on one of the few remaining daytime soap operas, Days of Our Lives, focuses on a young man struggling to accept that he is gay. When this storyline began, a “Christian” commenter on one of the soap’s message boards stated she would no longer be watching the show simply because her bible says being gay is a sin. Other posters tried to point out that Days always features stories that can been considered sinful: lying, stealing, murder, adultery. If the initial commenter truly wanted to stand by her convictions, she would’ve stopped watching a long time ago—or never even started.

It’s exactly the same with comic book fans who stop reading their favorite books if a gay character is introduced. It doesn’t make a lick of sense. Why should something that makes up only a fraction of a person’s overall being really matter? Would people stop reading if an African, Asian, or Arabian character is brought in? (Okay, yeah, there ARE some folks out there who would have a problem with one or all of these traits, but it only makes my point even more solid.) 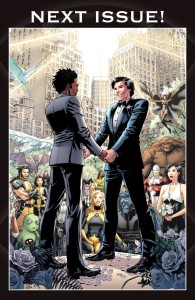 Fifty years ago, society went through a similar controversy with the onset of civil rights. Shortly thereafter, comic book publishers began bringing in “colored” superheroes such as Black Panther, Black Lightning, Luke Cage, etc. These heroes have since become prominent fixtures and have developed a large fan base. The United States even has a black president now (who himself has recently proclaimed his support for gay marriage), so why should it be any different for gay and lesbian heroes?

Basically, what I’m saying is the “gay issue” shouldn’t be an issue at all. Most people who are logical, rational, and open-minded agree whole-heartedly with this statement. Unfortunately, it seems as if there are many more people who are illogical, irrational, and closed-minded. Case in point: the “pastor” in North Carolina who came up with the brilliant idea of corralling all homosexuals and keeping them caged behind an electric fence. Total ignorance, for sure. But what’s even more frightening and sad is that there are far too many individuals out there who think he has the right idea.