by Avery KaplanNov 4, 2019From the Web, News0 comments

The Kickstarter campaign for POWER & MAGIC Volume 2, an anthology of Queer Witch Comics, is in full swing! This collection explores the power possessed by witches across the globe and features work from 26 women or women-aligned creators of color.

POWER & MAGIC Volume 2 features 200 pages of black and white comics and is available in both physical softcover and digital editions. 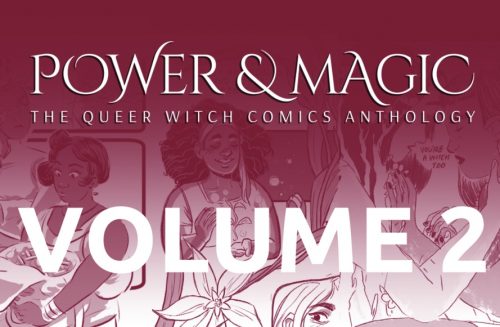 In addition to the second volume, POWER & MAGIC Volume 1 will be reprinted, as well! Backers can choose donation tiers with rewards that include copies of both Volume 1 and 2 in either digital or physical formats.

There are plenty of additional awards available from Power & Magic Press, as well, such as Immortal Souls, the companion to POWER & MAGIC Volume 1, and Heartwood: Non-Binary Tales of Sylvan Fantasy Volume 1. And the rewards aren’t just books: there is also an enamel pin featuring an exclusive design (with the opportunity to unlock two additional enamel pin designs), commemorative sketch cards signed and numbered by a random contributor from POWER & MAGIC Volume 2, and a unique bookplate illustrated by Alexis Cooke.

There are a limited number of backer slots for certain reward tiers, and the Kickstarter campaign ends on Saturday, November 9th. Head over to the POWER & MAGIC Kickstarter and make your donation right now to ensure you’re able to get your hands on this spellbinding collection! And be sure to check out the Power & Magic Press website for more details about this and other projects from the independent comics publisher, which is run by queer Afro-Cuban cartoonist Joamette Gil.