Here’s a story, that’s sad to tell, about a magical witch ne’er do well. The most mixed up lipstick lesbian on the block. Her future is unclear now. What’s a perplexed witch to do now? Buy the trade and see her smile (and do little else).

Elizabeth Watasin’s “Charm School, Book One: Magical Witch Girl Bunny” is a lesbian love triangle between a witch, a vampire and a Faerie. The beautiful witch, Bunny, a blonde bombshell, can’t chose between Dean, a butch bull dyke vamp, and Fairer Than, a sporty, earthy, RenFair-looking member of the Faerie folk. Yes. Her name is Fairer Than (I’ll give you a minute). 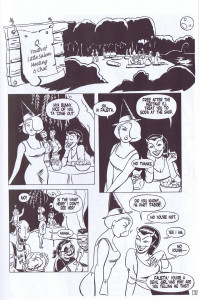 “Charm School” is a mash up of Archie and Sabrina the Teenage Witch, without most of the gentle humor.

In the mythical realm of Little Salem, where witches, vampires, ghosts and goblins all co-mingle in an LGBT fairy land (literally and figuratively), Bunny, a Marilyn Munroe lookalike, attends Charm School, a haunted high school. She is learning the finer points of witchcraft before she can don her pointy hat and graduate.

She’s got a vampire girlfriend named Dean, a rebel vampire with a lesbian cause. Dean looks a lot like James Dean, only James Dean probably swayed his hips more than vampire Dean. Bunny is in capital L love until she meets Fairer Than at a Queer Youth Mixer. Then, the witch can’t decide which bitch is better. 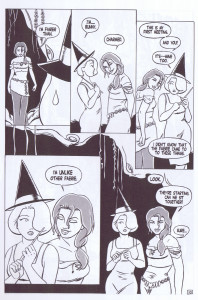 Bunny does some broom riding, whines to her bestie, Blanchet, and is frequently scolded by her ugly aunties (wicked witch stereotypes with pointy noses, warts and all) for her poor choices.

There’s also a hot chick, Fausta, a devil girl with pointy ears, horns and a curvaceous body. Another devil girl, Pippita, is comic relief. Pippita also has horns but she has a bulbous cartoon head and giant mouth, sort of like Ms. Pac Man in Hell. Inside the pages of “Charm School” you will also find a variety of funny-looking mummies, Frankenstein’s, and one-eyed monsters.

For some reason, the vampires are stuck in a “Happy Days” time warp. They all wear jeans, leather jackets and ride motorcycles. They spend the day working on their hogs, instead of sleeping in their caskets.

When your protagonist is a waffling witch, there should be a bit more to the story. Aside from their distinctive looks, there’s not much of a personality on either Dean or Fairer Than. 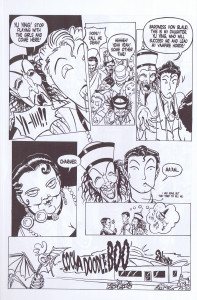 The story desperately cries out for an outer conflict to mirror the inner one. In a realm full of monsters, a reader would assume there would be more monstrous stuff going on, but it’s all pretty tame. For instance, Fairer Than is considered a bad girl because she lights up a cigarette and smokes it in a malt shop. Isn’t Dean out there sucking blood? It seems that smoking wouldn’t be considered such a bad ass thing to do in Little Salem, unless you were smoking human fingers or something.

The 96 page trade paperback doesn’t really have much going on. There is some truly great female pin-up art is beautifully rendered by Watasin, but there’s not much else to hold a readers interest.

It’s sad but true; “Charm School” flunks on a lot of levels.

Editors’ Note – Thanks for reading! Be sure to keep an eye out this month, never know what other spooky tricks and treats await around the corner! – PKA