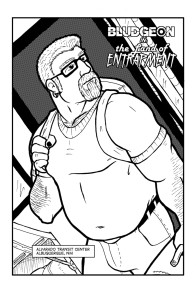 The first issue of this new comic introduces us to Mike, who is moving to Albuquerque, and it sets up a few mysteries at the same time as portraying a seemingly uneventful enounter at a diner. Our hero is large, gay, and generous, yet carries with him a secret that makes him taciturn around the people he encounters; and the way those people react to him forms as much part of the first issue as his own motivation. He is the alter-ego of a superhero known as Bludgeon.

As you’d expect from a title produced by a company called Burly Press, Mike is a bear-identified gay man, and is clearly marked in the author’s notes as a self-insert. So as with all good superhero stories, there are two threads we’ll be following with this story  – one the mystery that brings Mike to Albuquerque, and the other his experiences and personal identification in the gay and bear communities.

What’s good about it?

Jeremy Owen really manages to paint the character of Mike in a few simple panels and with sparse dialogue. Mike doesn’t talk a lot, but he’s polite and quietly amusing when he does, and although we don’t get to see a lot of him, it’s hard not to like him.

The scene in which Owen’s sexuality is revealed to the reader is understated on Mike’s part, but brutally honest in the reaction of the barista, who may make you squirm as much as I did, in total recognition. “OMG, you’re a ‘Mo?” she declares excitedly. “I can show you around town! I’ll introduce you to my gays! I’m a proud fruit fly.” 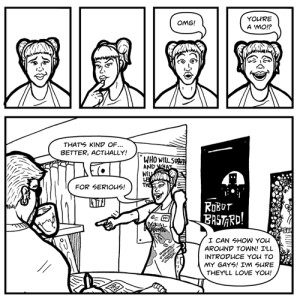 It’s not a comfortable scene, but it’s familiar, and Mike handles it with understated amusement while waiting for the subject to change. It’s just part of the way in which Mike’s character and background is introduced.

What’s bad about it?

Well,  nothing much happens, which is presumably why this is a #0 instead of a #1. The sum plot of the issue is: “Mike is a gay superhero who has moved to Albuquerque following a mystery that’s so far taken him across the country.” Sure, the way in which we’re told these things is well crafted as part of the story, and there’s no tedious exposition scenes that are all dialogue, no action, but we’re not told anything other than the bare bones. It’s not even fair to say that the foundations are laid for the plot. Rather, the lines are drawn on which the foundations will be laid.If you want an action packed plot driven issue, then this isn’t where to start.

But it certainly looks like action will start, and that it will be a fascinating journey when it starts. And if you want something to whet your appetite before #1 comes out, then #0 is an entertaining read.

The biggest drawback, however, would be postage and packing. Being produced by an independent comic publisher, it is only available online and free shipping is only available in the US. Shipping to the UK, for example, is $9 – approximately $7.82 and more expensive than the comic itself. 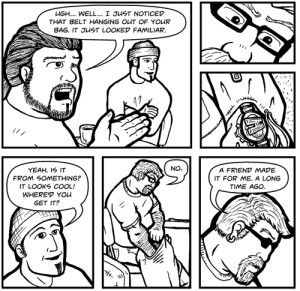 The art is a black and white line drawing style that works very well with Owens’ bold strokes, and the way he can tell a lot about a situation in just one panel. Look at the pattern of traipsed mud on the floor of the diner as Mike enters – emphasising the emptiness of the place and laying the scene. The poster on the wall reflects the conversation we will overhear at the only occupied table in the diner.

The characters are clear and varied in the art, and characterisation shines through. There’s a level of awkwardness in some of the faces and figure work, but this is the kind of thing I’ve seen improve very rapidly in comic art, so it’s hardly fair to judge Bludgeon on it.

All in all, Bludegon is a solid introduction to a promising character. It’s quiet, but that’s not fully noticeable until you reach the end and wonder “what actually just happened?” If you’re looking for independent superhero comics with a wider diversity in characters, this story about a gay superhero in the bear community is a good thing to add to your collection.

Editors’ Note – For more on this and other great work from Jeremy Owen please visit www.burlypress.com! And be sure to also check out the New Readers blog to read more super neat comic reviews from Debi and the other awesome contributors of New Readers…start here! Thanks for reading! – PKA