At Long Last, “Jayson” Gets a Job!

Debuting at New York Comic-Con and APE in San Francisco! 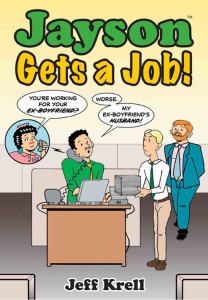 In Jeff Krell’s latest graphic novel, Jayson Gets a Job!, everyone is having a career crisis. Desperate for work, Jayson pulls out the stops to land a job at his ex-lover Walter’s firm – with unexpected results. Meanwhile, Arena’s parents cut off her allowance and she needs a real job – fast! And with his DVD business on the skids, Robyn plunges into a gender-bending new venture.

Krell explains, “When I created ‘Jayson’ in 1982, I had just earned a liberal arts degree and entered a job market that was utterly unreceptive. I took a series of low-paying jobs that didn’t even require a college degree, just because I had to pay the rent. Now, thirty years later, with the ‘jobless recovery’ in full swing, a new generation is facing similarly dismal prospects. I think a lot of people will relate to Jayson’s job struggles.”

Sound depressing? Not in the hands of a talent like Krell, who unleashes his trademark barbs and sly asides at every turn. As he effortlessly maneuvers his characters between scenarios involving comedy, politics, sex, and science fiction, Krell manages to laugh in the face of a struggling economy, just as he did during his – and his strip’s – formative years.

Jayson Gets a Job! (96 pp., $12.95) will debut at New York Comic Con (Oct. 11-14), where Krell will be a guest at the Prism Comics booth, as well as at San Francisco’s Alternative Press Expo (Oct. 13-14), where Prism will also have a booth. “Jayson” comics and graphic novels are available at finer bookstores, progressive comics shops, Amazon.com, IndyPlanet, iTunes, and the Prism Comics Online Shop. For more information, visit ignite-ent.com.