In A Thing Called Truth, the first issue of which is now available at your local comic shop, Dr. Magdalene is a pharmaceutical scientist who never takes a day off… but when some complicated office drama leads her to lose her job, she finds herself on a cross-continental road trip… with a woman she’s never met before?! 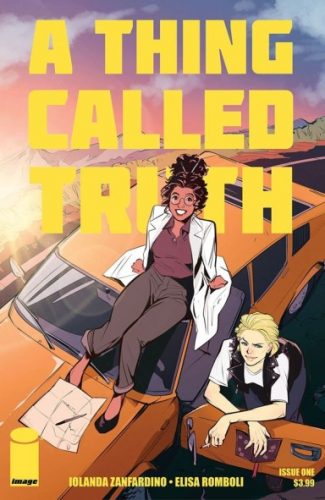 Prism caught up with creators Iolanda Zanfardino & Elisa Romboli to ask them all about what went into the road trip story, how it compares to their previous comic (Alice in Leatherland), and to ask whether or not scientists will ever solve one of our society’s greatest problems: hangovers!

Iolanda Zanfardino & Elisa Romboli: Hello Avery, hello Prism Comics! Thank you for having us on your site, we’re really honored!

Avery Kaplan: What was the genesis for A Thing Called Truth? How did it evolve over the course of its creation?

Zanfardino: My early desire was to tell a story about the love for the sense of freedom that travelling gives you and for road trips in particular. For me and Elisa, it’s the best way to discover new places together!

Then, slowly, that idea turned into a new challenge to myself: trying to tell the search for a compromise between living without any regrets and devoting yourself entirely to a great goal. 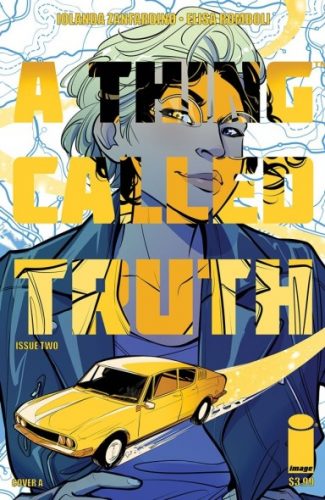 Kaplan: Can you tell us where the interesting and singular title A Thing Called Truth came from?

Zanfardino: Unfolding it might be a spoiler, but let’s say it’s strictly linked to the plot start, to the main protagonists’ pasts and to the meaning of their trip.

Kaplan: What went into the decision to make one of the main characters a pharmaceutical scientist? Was there any particular inspiration for the character of Dr. Magdalene?

Zanfardino: I often read articles about innovations in technology and science, and I’m fascinated by how the research and sacrifices of just one person (or very few people) can change the world and save lots of lives!

In addition to this, I liked the idea of creating a genius female character completely focused on her own big scientific project to the point of forgetting everything else. Media is full of male characters like that, and I wanted to point out that women can be such a mess too!

Kaplan: While the last story we spoke with you both about, Alice in Leatherland, was mostly about romantic relationships and finding yourself, A Thing Called Truth immediately hits the ground rolling with a more action-based plot! How did working on these two different projects compare, or are they more similar than they might at first appear?

Romboli: Iolanda wrote A Thing Called Truth scripts while I was still working on Alice in Leatherland pages, so for me the jump from one project to a different one was almost non-existent ! (Haha-)

Well, to be honest, yes, they’re more similar than they might appear. Although you probably have to go a little bit further with the plot to find out. The search for the protagonists’ true selves, of what they really want and what their own path is remains a present theme.

Kaplan: There are lots of great car action scenes in this issue! What goes into drawing the perfect car?

Romboli: Thank you! Engaging with something different and embarking on car action scenes has been interesting for me!

Well, I’m actually intrigued by cars coming from the 60s or the 70s, that good ol’ vintage feeling… Furthermore, I made this choice because I thought it was coherent with the environment, since the first part of the story is set in Germany. 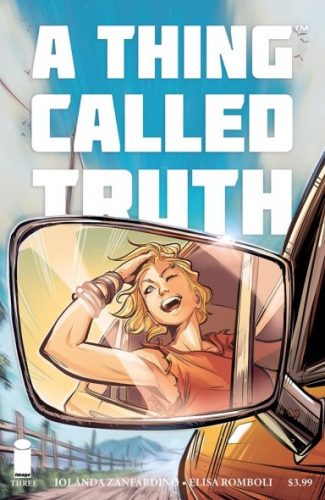 Kaplan: Can you tease any of the locations or adventures that are coming up the turnpike in A Thing Called Truth? Is there a chance we’ll end up seeing some romance?

I’m a big fan of romantic comedies, so I am afraid that romance will always be a very important part of my stories.

In the meantime, I can say that the very first destination of the trip will be Rome, the city where I have lived for more than ten years and that I love endlessly.

Kaplan: Will any doctor ever find the cure for a hangover? Would this be a world-changing development?

Romboli: Absolutely! We should have thought of this as Mag’s goal, it sure would have solved many problems! (Haha-)

Kaplan: Is there anything else you’d like me to include?

Zanfardino: Oh! Maybe there’s something I should clarify: I realized too late that it’s not very clear that our main protagonists live in Germany! This caused some confusion in the final scene, where many readers thought that Mag, starting from the USA, found herself on the other side of the world! (While driving from South Germany to Italy in one night is very easy). I apologize for the misunderstanding!

Zanfardino & Romboli: Thank you so much again and thank you for your support!

A Thing Called Truth #1 is available at your local comic shop now, and issue 2 is rolling your way very soon!