The Setting: The bedroom of a Queer Comics Collector

The Time: The wee hours of the morning on Christmas Day

A distant clock strikes one as the QCC awakes with a start.

GHOST #1: I am the Christmas Ghost of Comics Past!

G1: You know, like in the classic A Christmas Carol by Charles Dickens. Surely you’ve heard of it! Sort of It’s a Wonderful Life with Mr. Potter as the main character.

QCC: Boy! They don’t get any tougher than that!

G1: On the contrary. Next, he has to visit Dan DiDio!

G1: But, we digress. I have come to revive in you the wonder you once felt in regard to the great super-hero comic books you read as a boy.

QCC: In the Silver Age? Those silly things? But, they’re so campy and frivolous. Why, there’s no blood and dismemberment at all! And, nobody ever gets raped or tortured! How childish and boring!

G1: Ah, but you didn’t think so at the time. Remember your excitement when you got home with your weekly purchases? The great artists? Ditko, Kirby, Swan, Kane, Anderson, Kubert, Infantino? The fast moving adventures, with complete stories in one issue? All those handsome super-heroes in bright, tight clothing?

QCC: Er…I did have quite a “thing” for Superman.

G1: And Hawkman used to have you going up, up and away too, didn’t he?

QCC: Well, he didn’t wear a shirt and I… But, I was naïve. I’ve learned a lot about life since then. Anyway, the Silver Age ended in 1969. The same year as the Stonewall Rebellion.

G1: Another battle for truth, justice and the American way! Also with bright, tight clothing.

QCC: Hmm. I never thought of it that way. But those days are gone. Times are different now. I wish I could think like that again. But, I’m afraid that it’s too late for me to change. You can’t find an old fag new tricks. It’s a different world today.

G1: Balderdash! Your next visitor will help you see that.

QCC: So we’re going through the whole routine?

QCC: Good luck with that! Yawn! Guess I’ll get in a little snooze before the next four color phantom swishes in. zzzzzz… 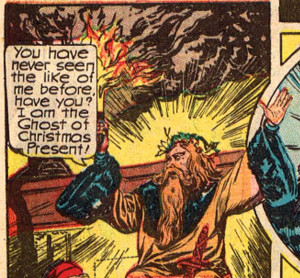 Ghost #2: I AM THE CHRISTMAS GHOST OF COMICS PRESENT!

G2: Sorry. My friends tell me I tend to be a little over enthusiastic.

G2: No, no! I mean, just touch the hem of my robe and we’ll fly around the world as I show you that the sense of wonder and fun that you used to feel still exists in comics!

QCC: Er…Couldn’t you just tell me about it? These articles are only supposed to be 1,000 words long. We’re already up to 523!

G2: Oh, very well! You think that the joy that you felt when reading comics as a lad is gone forever because you obsess on the Big Two. There’s so much more to comics than that! The small press companies! Self published books! The internet!

G2: Quite so! You really should get out more. Heed my words! Broaden your experience to include the fine, fantastic work that is being done outside the claustrophobic confines of corporate cupidity, or I fear that a future is coming that will leave you a hopeless, cynical, soulless husk! Your next visitor will show you what I mean. Beware!

The clock strides three. A tall, robed, hooded figure materializes at the foot of the bed with only a gaping black hole where its face should be.

QCC: Eek! Are…are you the Christmas Ghost of Comics Yet to Come?!

The figure nods its empty noggin.

QCC: You’ve come to show me what lies in store for my beloved comics?

QCC: Very well spirit! Although I’m finally starting to get a little bit scared! Show away!

The ghost extends its gaunt white hand. An image begins to form in mid air.

QCC: A copy of Wonder Woman for January, 2017! MC Comics! “Fearsome First Issue!” Another one?! The book is opening. I wonder what she’ll be… A three-way with Thor and the Beast?! No! Wait, here’s the second issue. Maybe it’ll be… A four-way with Hercules, Valkyrie and the Martian Manhunter?! No, no, no!

The hand waves once more.

The hand flits a fourth time.

QCC: The Justice League of Avengers! “Frenetic First Issue!” They’re all carrying assault rifles! And…chainsaws?! Stop! Stop! I can’t stand it! Oh spirit, please! Is there nothing I can do? I’ll change! I promise! I’m through with J. Michael Straczynski! I’ll never even look at another variant cover! Every dime I spend will be on books that respect my intelligence and don’t pander to the lowest common denominator! I’ll treasure the true spirit of comics and celebrate it all the rest of my days! Please! Please! Please!

A light streams into the room. Sunrise.

QCC: Why, it’s Christmas morning! And, I will change! Those ghosts were really on the ball! If only there was one who could stay with me and help me to always be optimistic and full of true wonder!

CASPER: Golly! Did someone call?